I was one of those weird children who was obsessed things no one else bothers to know ever even existed.

By the time I was in high school, I knew more about dead medieval scholars than most adults twice my age. And I had a bit of a literary crush who was, shall we say, twice rendered unavailable:

First, he had been dead almost five hundred years by the time I was born.

And second, even had he managed to beat Ponce de Leon to the Fountian of Youth, he was a dedicated monk of the Catholic Church.

Yeah, talk about love from a distance.

Desiderius Erasmus was born in Rotterdam, Holland, in 1469. But he managed to expire all the way over in Switzerland in 1536. Which means he lay at rest just a few hours’ bus ride south from me when I was staying in Karlsruhe, Germany, on the French and Swiss borders at New Year 2018.

You might not be familiar with the name Erasmus. He was a great humanist and scholar of the Northern Renaissance, which doesn’t get quite as much press as its Southern counterpart in Italy. I guess the Italian were just flashier. Or better at 16th century marketing? Either way, when we think “Renaissance” we think Da Vinci and friends, not Erasmus.

To be a “humanist” in Erasmus’ day was not necessarily to believe man is the center of the world, as is often claimed today. Back then, being a humanist meant being interested in the humanities—comprising subjects like languages, literatures, and philosophies.  He was also outspoken in his beliefs that the Catholic Church definitely needed reform. And although he did not feel kindly toward the Protestant Reformation or the Anabaptists—the spiritual lineage in which I was brought up almost five hundred years later—his work did indeed inform it.

Especially a little book called In Praise of Folly, which criticized the abuses of the Catholic Church through sharp and witty satire.

That’s where I got on the Erasmus train. Somehow, at age 16, I got ahold of Erasmus’s In Praise of Folly and read it. And loved it. It was amazing to laugh behind my hands at the sardonic humor of someone who had lived so many centuries before me. That book made an impact on me.

You might say Erasmus and I, well, had a moment.

And so it happened that on a damp, cold winter’s day in early January 2018, I decided to renew that bond, though it had been many years now since Erasmus and I had our moment.

Somehow I found out that though Dutch by birth, Erasmus had chanced to expire in Basel, Switzerland, which was south of my current location in Karlsruhe, Germany. So right after the new year I boarded FlixBus—that beloved cheap transportation of college students all over Europe—and took the three-hour ride south in search of his grave.

I fell in love with Basel at first sight. Sure, early January wasn’t the most flattering time to visit this city, through which the Rhine river continues to wind after exiting Catholic southern Germany. But still there was something charming about brightly-colored houses all shuttered up against the cold. And the warmth of the light streaming from the open shops made all the difference.

Every shop window felt like a welcoming pair of arms ready to enfold me in a warm embrace. 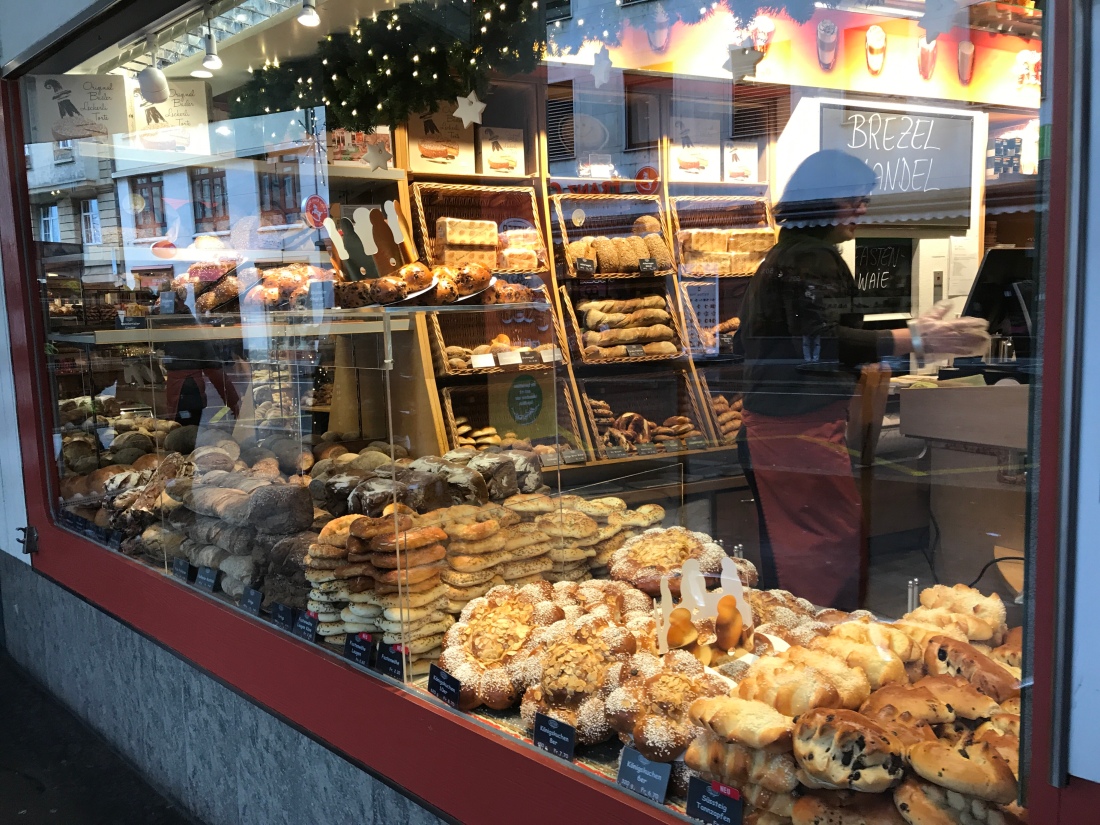 The price of goods was less welcoming, I have to admit. When I arrived at the train station (where the bus debarked), I desperately needed a cup of coffee and a doughnut. But the privilege of such a small treat, which would have cost just a couple euros back in Germany, cost more than the equivalent of USD $10 in Swiss Francs.

Well, for a girl traveling on a budget that was like my biggest expenditure in at least a week other than groceries. But I bit the bullet and enjoyed every minute of it.

At least I can say I had a snack in one of the world’s most expensive cities. 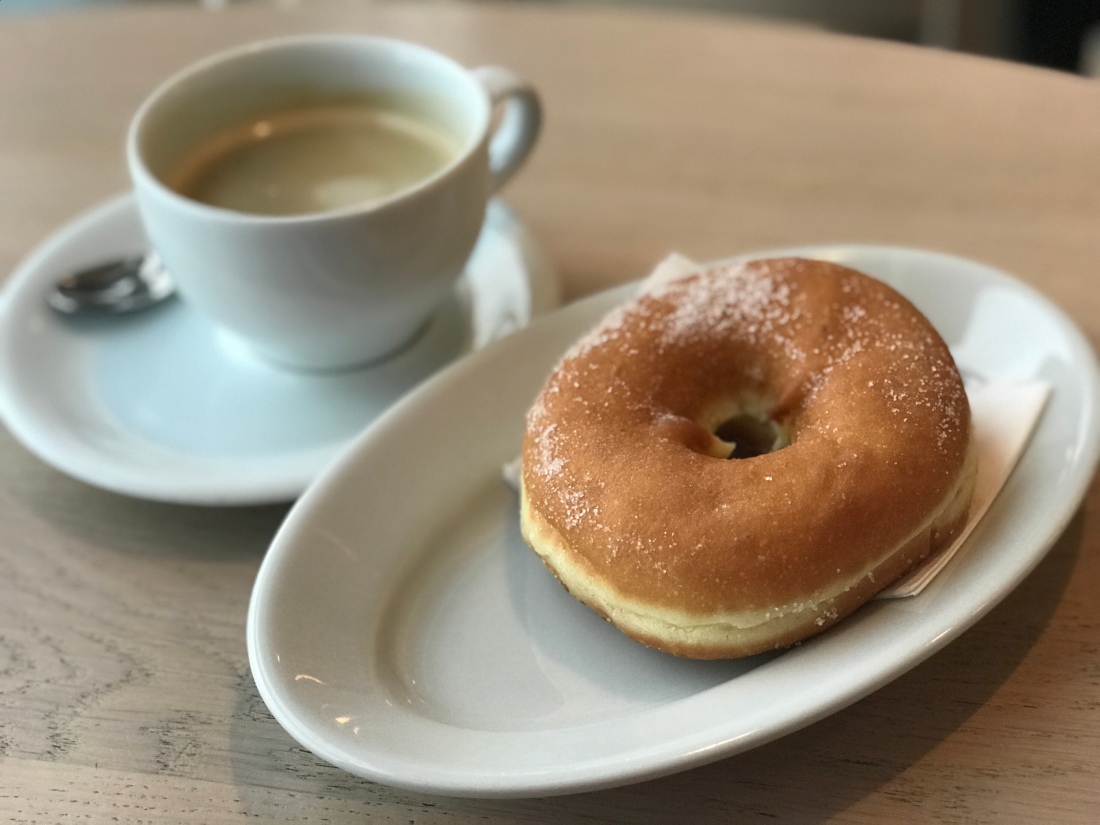 On my way to the Basel cathedral to pay my respects to Erasmus, I got sidetracked by the Basel Town Hall. This marvel of Swiss architecture boasted a riot of color and design more intense than anything I had seen outside of my travels in Nepal.

It almost didn’t look European, it was so … undignified. And yet the sight of it delighted me. A feast for the eyes. And proof once again that you never know what sort of surprises you’ll encounter.

I took time to wander all around the enclosed inner courtyard, where scenes of justice from Swiss history played out in colorful murals and frescoes. The Christmas tree was a nice touch, too. 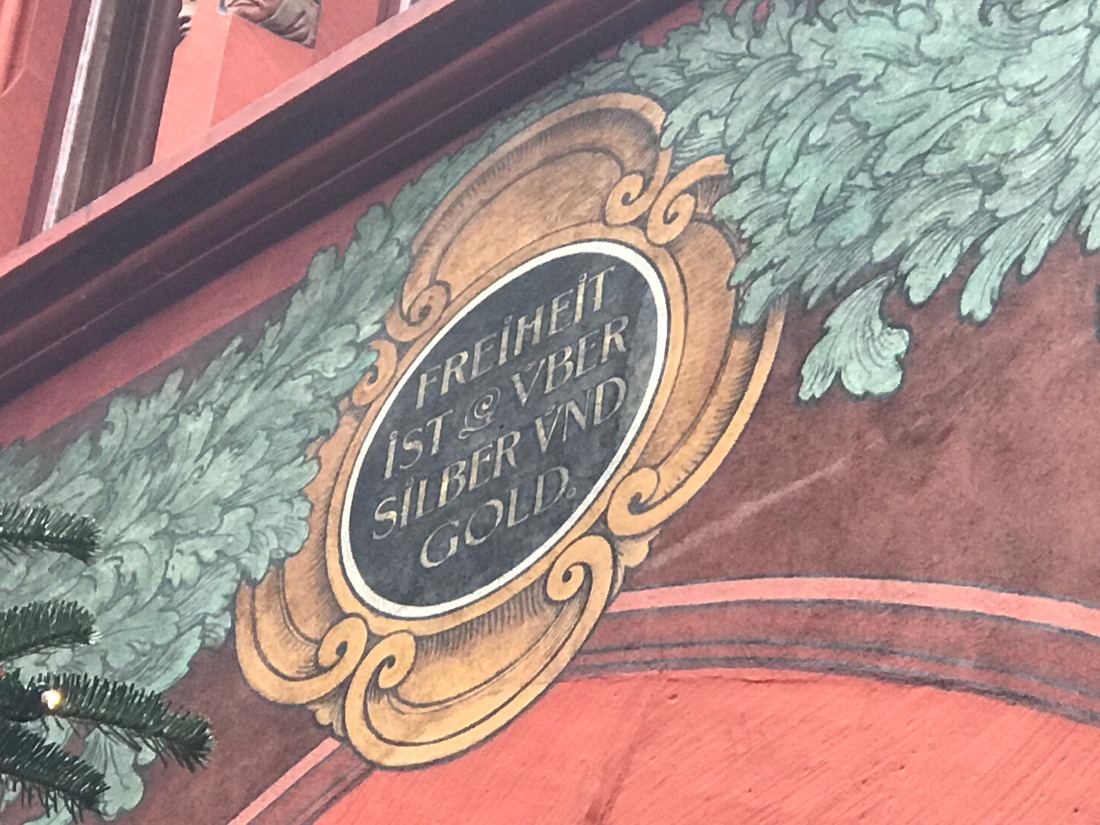 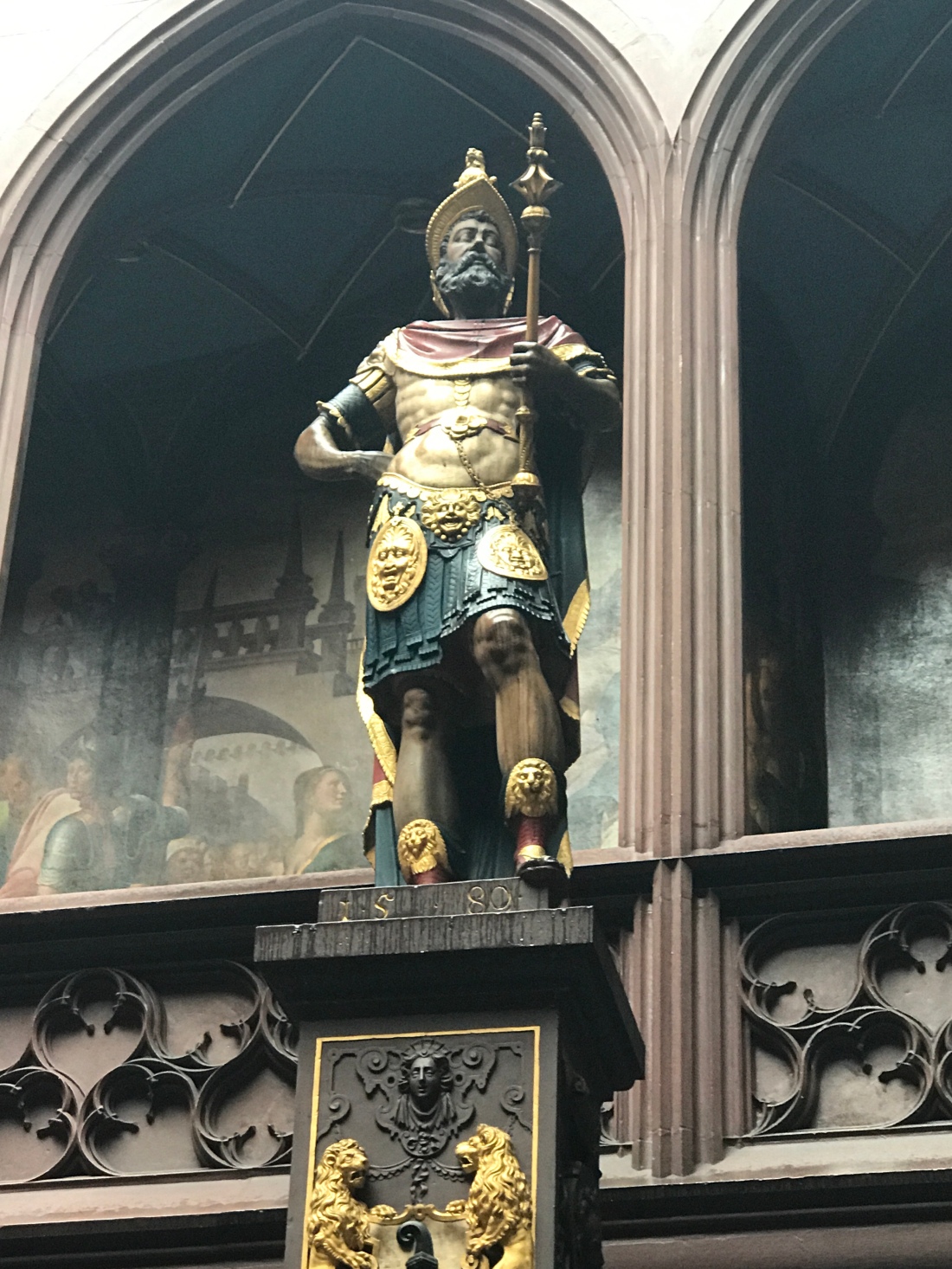 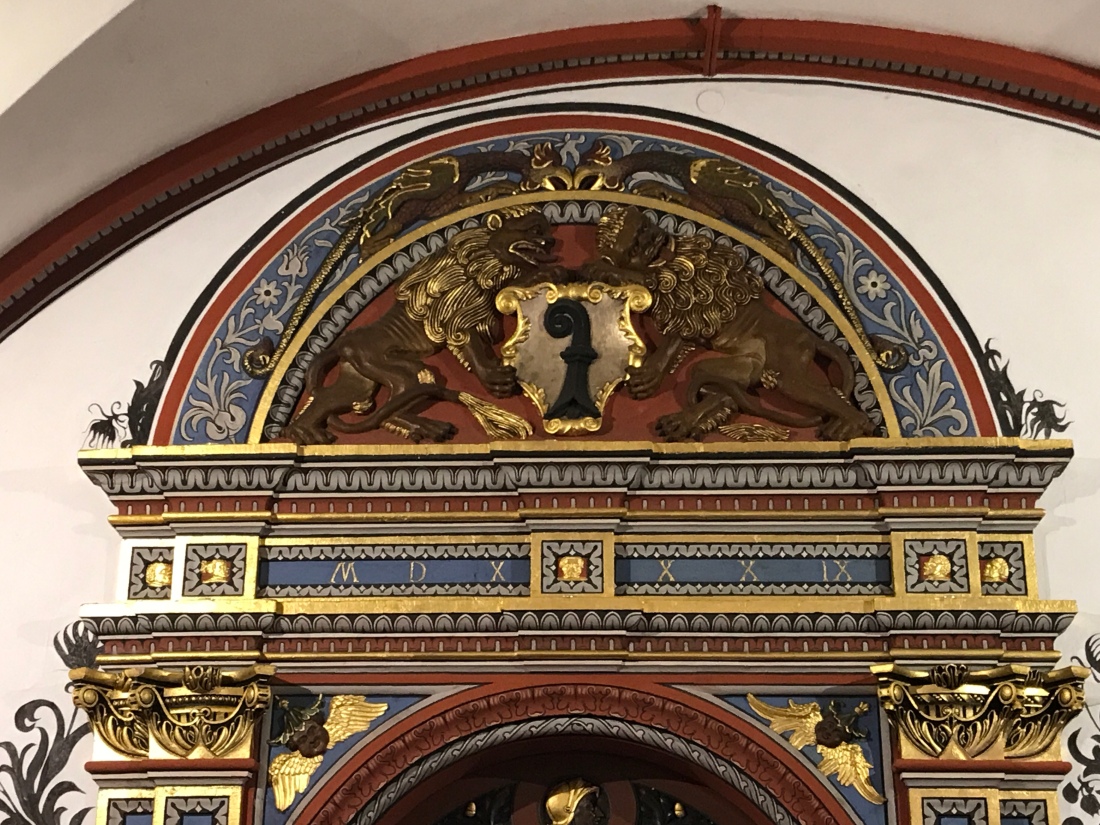 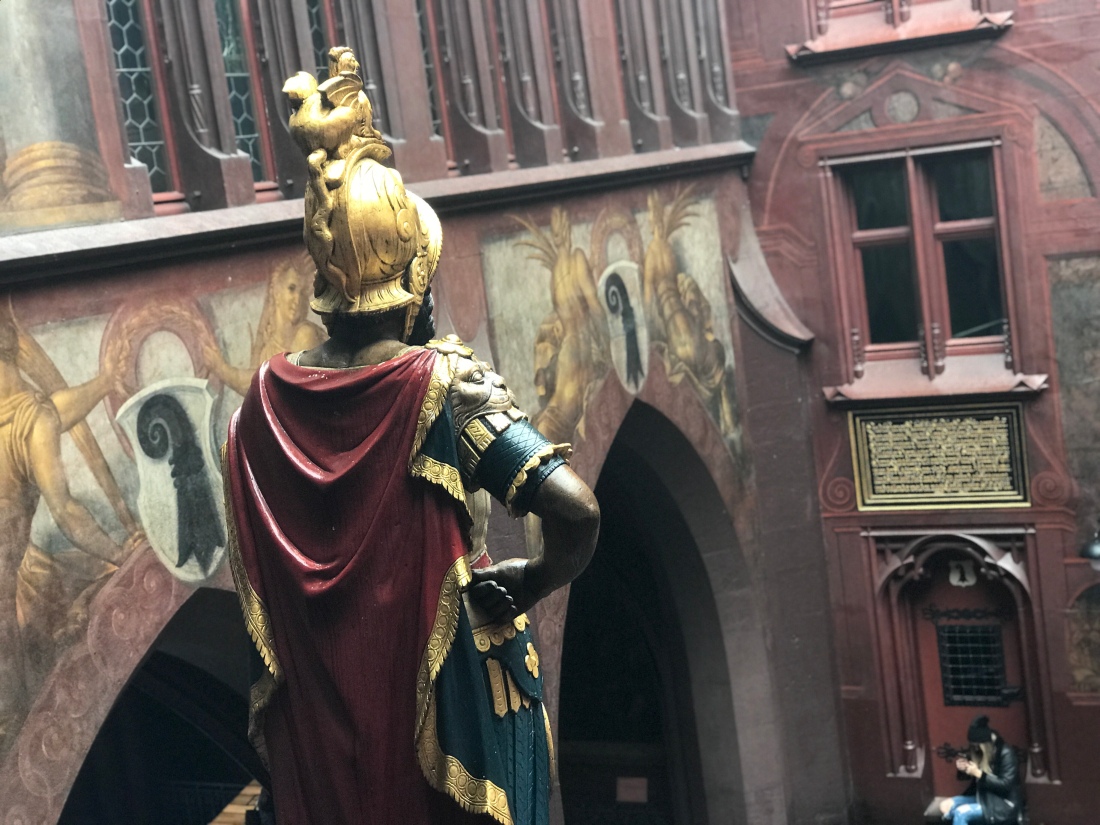 Well, all this took some time—and then I remembered why I had actually come: to pay respects to my childhood literary crush, who was (supposedly) lying at rest beneath the floor of Basel Cathedral.

Leaving the city center, I wound my way out toward the bluffs above the Rhine River. At some points the path was so steep I wasn’t quite sure I could climb the rain-slackened cobblestones in my low-tread boots. But I managed to make it up.

Finally, around 1 o’clock in the afternoon, I sighted my destination: the amazing Basel Cathedral. (Also known as Basel Minster.) It turns out this remarkable building is also the resting place of quite a few other notable medieval people—mostly patrons who gave for the cathedral’s construction.

Fun fact: The structure itself took almost 500 years to build, with a *minor setback* in the 1300s when the structure was almost completely leveled by an earthquake. Can you imagine building something which you never get to see completed in your lifetime?

Coming from such an instant-gratification age, I am not sure how anyone back then had the patience for these multi-century construction projects.

The inside of Basel Minster was just as awe-inspiring as the outside. It was as if I could  feel those generations of laborers, toiling in summer heat and winter’s chill, their murmurs punctuated by the chink chink of chisels and the moan of the pulleys as each stone block was pulled up and set into place. Everywhere in Europe the old church walls resonate with all the lives lived inside them. Even, of course, as modern church attendance continues to dwindle in all these countries.

The sanctuary of Basel Minster was so huge, it took me almost an hour (or more than an hour?) to wind my way through it, squinting at the gravestones. The diffuse dimness of afternoon clouds, pregnant with rain, was the only real light in the place.

And there were so many gravestones. So, so many.

Yet none of them seemed to be Erasmus. 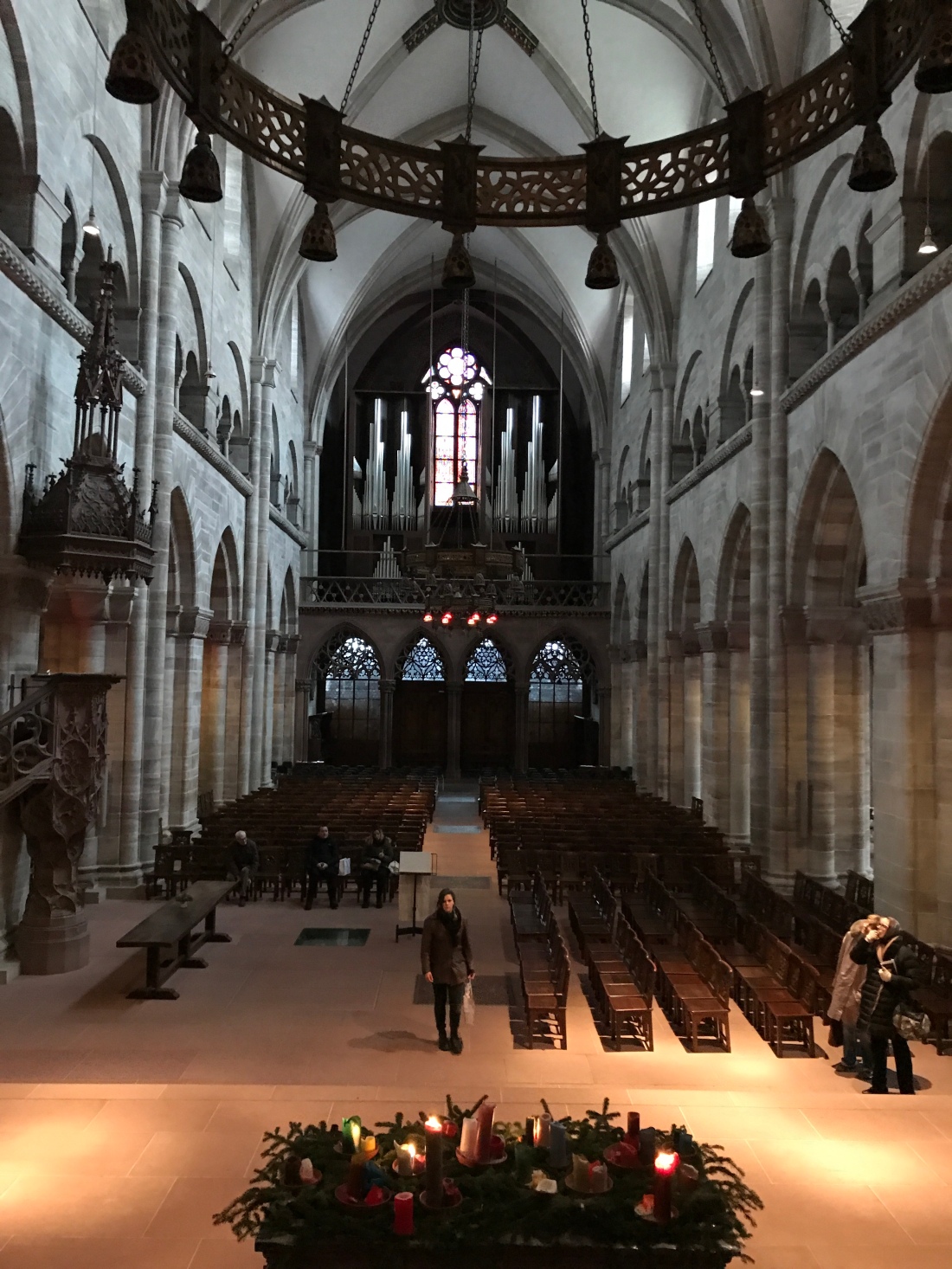 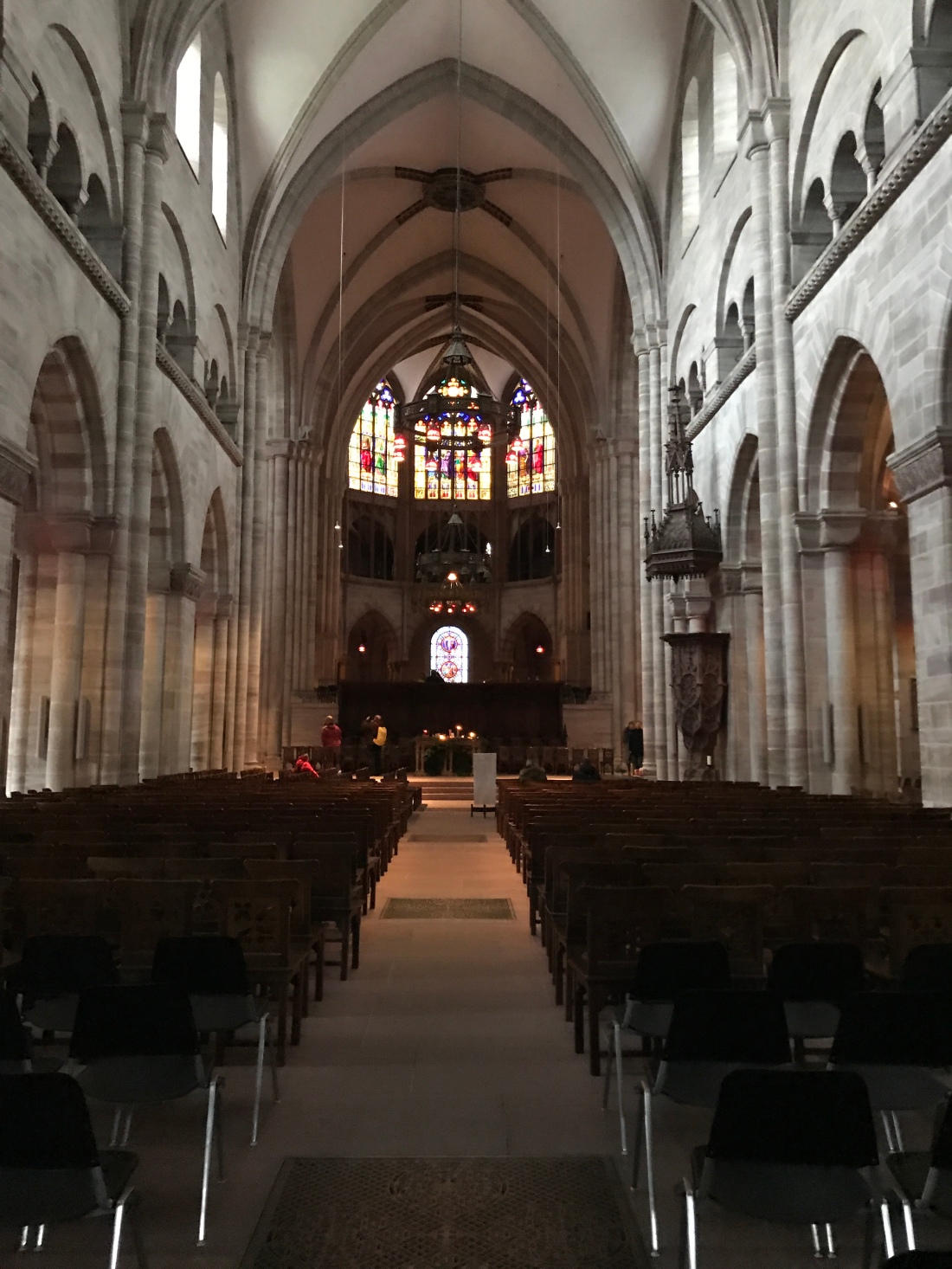 For more than an hour I searched for my literary beloved, but to no avail. I wondered if I had misread about his burial in Basel Cathedral—or if perhaps the author of the article had been misinformed as well. Plus the clock was ticking. My FlixBus home to Karlsruhe would be leaving in about two hours. And I still had to walk back through the old town all the way to the train station.

Finally, I chanced to find a map of all the graves. Turns out dear Erasmus was hiding behind a pillar—in a not-so-fancy grave as many of the others, like the one in the photo above!

I back-tracked to a modest side-sanctuary set off a bit from the grandeur of the main nave. And sure enough, that’s where I found him.

Eighteen years after I first “met” Erasmus in the pages of Moriae Ecomium, we finally met face-to-face, 5000 miles away. Talk about a long-distance romance! 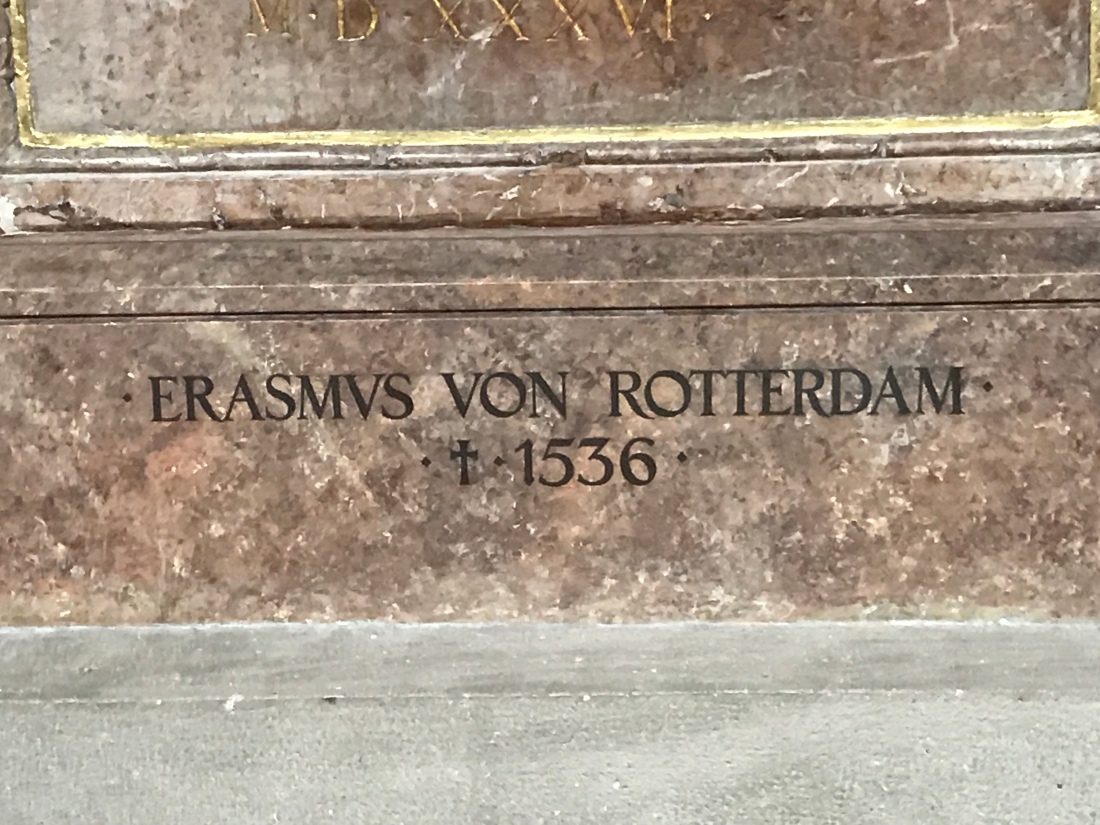 That winter I spent in Europe was one of the roughest of my life: full of uncertainty, lack of direction and a lot of grief. But there were up moments. Like that day in Basel, Switzerland, where I found my dear Erasmus at last.

Books matter. Even when centuries pass from the time they were written. Standing there in Basel Minster, I felt like not a single year had passed at all, and that Erasmus and I were just old friends who had catching up to do.

I caught up with him, for once. And I’m glad I did. Though another five hundred years may pass before we see each other again …

“I am a feather on the breath of God.” - Hildegard of Bingen View all posts by Lisa Maria