Me in 2012, in my Scrappy Storyteller steampunk costume

Recently, I made the decision to move my blogging back to WordPress.

This is the first platform I ever used to share my words with the world–and despite having hopped around to other platforms, I’ve come back here because it’s simple and built so well for SEO and for organic connections. In doing so, I bumped into my old art again.

Let’s rewind three and a half years. I was living in a 120ish-year-old Victorian frame house on Milwaukee’s blustery east side, just ten blocks from Lake Michigan. My husband (now ex-husband) and I had bought the house in 2012 and restored it from utter ruin to a beautiful gem on the block, and part of that restoration was turning two useless, broken-down rooms into a beautiful creative studio.

My first studio was a second-floor bedroom, which became a cozy nest for many creative endeavors, including my blogging, a 24-part serialized online fantasy novel, collaborative web series and Steampunk comic book. 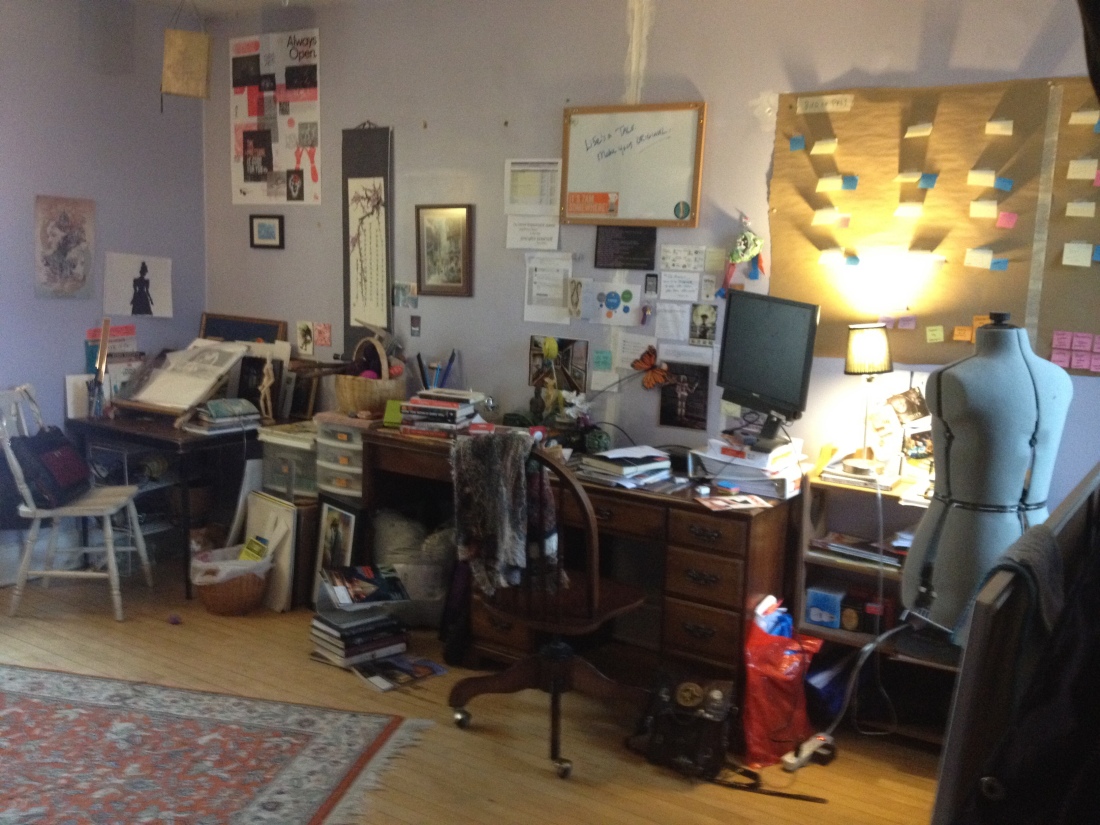 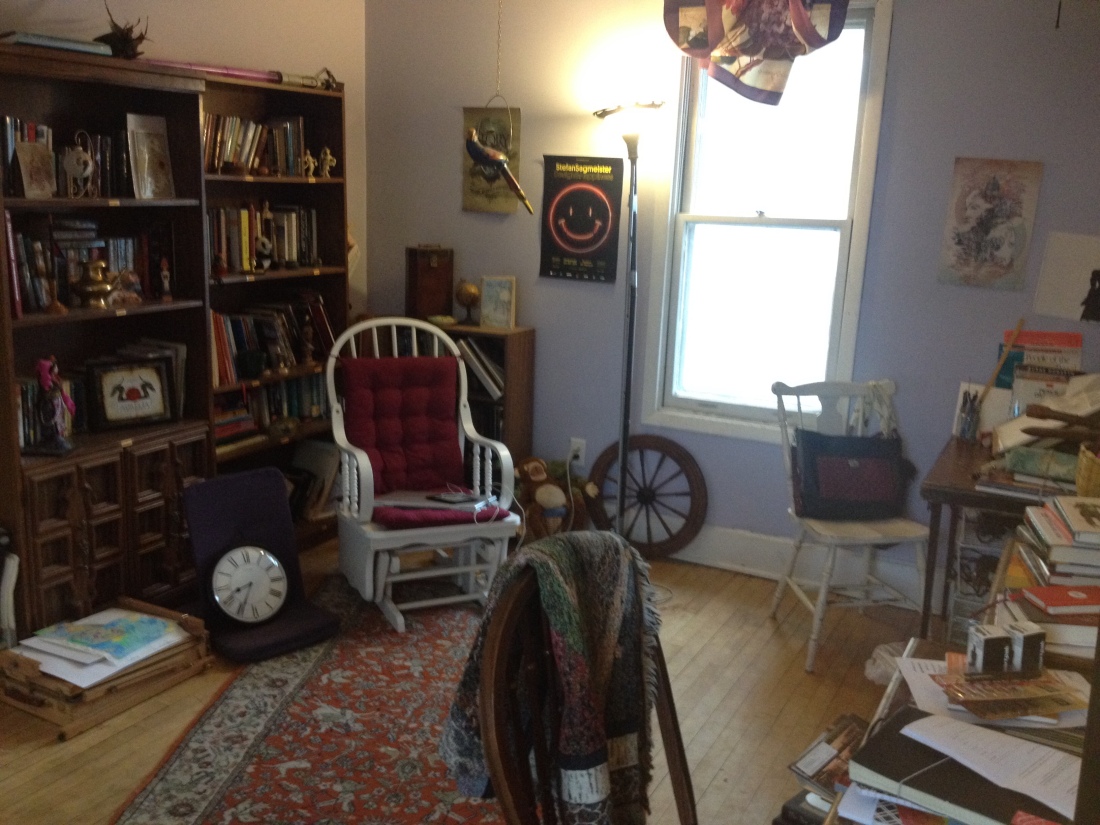 In Spring 2016, I moved from that now-overflowing space into the attic, which my ex-husband had turned into a “rec room” for the buyer who would eventually allow us to flip the property. In the meantime, I made it my new, larger studio with dedicated spaces for sewing and appliqué, painting, reading, writing and running my small branding agency for women-owned businesses.

Interestingly, I have no photos of that second space. But it was about three times the size of the space above, if not more.

Our 120ish-yr-old Victorian home after fresh painting. (The third-floor window was my studio.)

At that time, I was running a blog about the improvisational creative process, called “Scrappy Storyteller.” The blog is no longer live. When I found out I was getting a divorce, I was so devastated that my creative process shut down almost instantly, and I eventually shut down the blog.

I thought I had deleted that blog. Until this month, that is.

While poking around in WordPress to get this blog up and running, I found the old Scrappy Storyteller, and with it, literally hundreds of posts that represented my creative hopes, fears, dreams, challenges and successes.

It truly felt like a “blast from the past.” Since I last wrote on Scrappy Storyteller, I have gotten divorced, built a business, destroyed it, lost everything in the process, traveled the world, renewed my relationship with God and wound up settling in the United Arab Emirates–where God has blessed me with a brand-new, overflowing life I could never have imagined in the old one.

Reading those old posts, I wanted to reach out and embrace the struggling, hard-working, sort-of-successful-sort-of-not woman that I was, and let her know that everything would be okay.

Yes, her worst fears were about to come true in the biggest possible way.

And yes, she would survive it all to rise from the ashes brand-new.

In other words … everything I was hoping and dreaming for in those long-ago days in my creative nest on the shores of the Great Lakes, have or are beginning to come true. I just didn’t know it would take the biggest losses of my life to unlock those good gifts.

I felt an overwhelming sense of gratitude reading those old posts, as if finding them were a huge God-gift I hadn’t even expected.

You see, back when I got divorced, I went into a creative hole. Perfectionism had been my biggest enemy as a young creative–and my divorce was like the crowning proof that I was a failure, at least in my mind at that time. How could anyone want to read what I had to say when I had failed at my marriage? Partially because I was more married to my craft than my husband?

It seemed prudent to let all that writing go. So I shut down the blog and all my creative projects that were on the docket for that year, and for the three years since.

This pattern of creative rejection–and ejection–would continue over the next three years.

Trying to find my mojo again, I started other blogs and other projects, only to get halfway through and eject them, just like before. For some reason, I thought that getting rid of what I had done in the past was the only way to embrace the new.

And in those weary years of wandering, I desperately just wanted the new to come.

Now, looking back from a vantage point of time, healing and a greater understanding of God’s never-ending flow, I realize it wasn’t necessary to eject everything I had done.

Cutting off a diseased limb isn’t the way to heal the whole body (usually). For most maladies, a holistic treatment is available that preserves the limb. But amputation was the only method I knew. And in some ways, it was probably a reflection of my self-rejection, sadness and sense of failure at the time.

But now … but now … God has unexpectedly given me a new opportunity: to embrace that hurting young woman, recognize that nascent prophetic voice within her and retroactively extend healing to who she was.

After all, God lives outside of space and time. Sometimes I wonder if that Younger Me still exists concurrently with the Current Me in His vision of time. I don’t know–but I know that my own healing is tied to forgiving, deeply accepting and loving who I was in the past.

I’m excited to do that today.

Going forward, I’ll be sharing select posts from Scrappy Storyteller. I’ll denote them clearly so you know they aren’t my latest thoughts and ideas. But in making space for the Old Me in this creative space of mine, I think it will be a more fertile ground for the New Me to grow–especially as an artist.

Welcome, Old Lisa, Scrappy Storyteller. I celebrate who you were, the challenges you faced and the journey you went on.

You paved the way for Who I am today, and I bless you.

Your story is part of my story, always.

Let’s tell them together.

“I am a feather on the breath of God.” - Hildegard of Bingen View all posts by Lisa Maria

One thought on “Life After Creative Perfectionism: Making Friends Again with Your Old Art”